Bollywood is very popular in India and beyond for its distinctive and exclusive display of sentiments and emotions through its movies. In more often than not, the Bollywood movies that are highly emotional are truly motivating and inspiring.

Based sometimes on the real lives of people, and sometimes inspired from true life stories,Bollywood has produced many movies that focus on life struggle of the common people, who despite the odds, prosper in life and become successful in life, or sometimes fail but refuse to give up on whatever dream they have.

Without much ado, here are some of the Hindi movies that will truly inspire you.

This movie is based on a real story about a man whose love for his people make him cut through a mountain so that he can build a way his community to get to the hospital faster across the mountain.

At the beginning, people laugh at him, but eventually, he shows us the power of commitment and strong will.

This is a Hindi film that tells a story about a relationship between a young boy at his teenage and his abusive, strict father. The film, through this story, tries to dig deep into the parenting pressure on teenagers to take on a career path they choose instead of what the child aspires to become.

This movie is truly a tight slap to the Indian education system. It is one of the eye-opener movies to for all the parents in India who insist that their children must pursue a career in Medicine or Engineering.

The movie tries to teach us one thing – “Educate yourself to improve your abilities and not to be successful because once you have the ability, success will definitely along at any circumstance”.

This Bollywood movie tries to tell us that if a common man really wants, then he can actually disturb the entire administration of a country.

A Wednesday is a movie about the wrath of a common man. He feels frustrated by the fact that the Indian Government, instead of convicting the terrorists and punishing them accordingly, only keeps them in custody for too long.

This 1971 movie is emotional, motivating and inspiring to the whole world. It’s about Anand, a young man who is dying of cancer, but committed to live and stay joyful for the remaining days of his life while spreading happiness and hope in the lives of other people, especially his greatest friend Dr. Bhaskar.

This film features a group of young children, who do everything to rescue a stray dog from being killed by the authorities. Chillar Party shows the love and affection by young children towards an animal, and the unity to fight for a good cause that we parents or adults hardly posses especially nowadays.

It shows us that if only we could be united to fight for something we believe is good, then nothing can be beyond our rich. 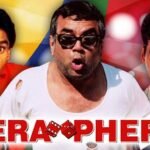